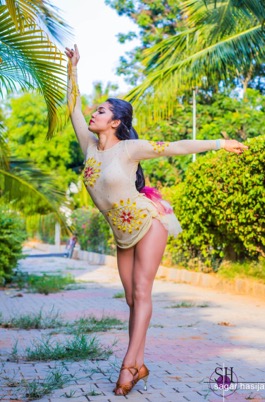 Megha Khatri is the current ASIAN PROFESSIONAL SALSA CHAMPION 2017 and Runners up in Bachata and Solo division ‘17.

Known as the Salsa queen of India, Megha Khatri has over 8 years of dance experience and started her journey with Latin Ballroom forms like Cha Cha, Samba, Rumba. Following which she moved on to train dance forms like Salsa, Bachata, Kizomba & Acrobatic Rock n Roll.

She is a Certified Yoga Instructor and also trains in Gymnastics. Her Experience helped her formulate her own curriculum for maintaining fitness and flexibility. She has represented India for Performances, Competitions & World Championship in various countries like China, South Korea, Russia and  Europe. After starting her teaching career at the well renowned SANDEEP SOPARKAR’s Ballroom School, she has been actively teaching and spreading the passion for her dancing in many cities across India.

She currently along with her partner are the only couple representing India and Asia for Acrobatic Rock and Roll World Championship being held in France in December 2017.